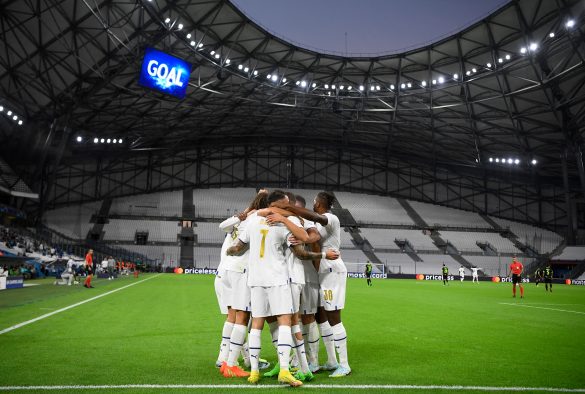 The Olympians with a statement win as Marseille come out 4-1 winners over Sporting Lisbon in an eventful game which saw a goal in the first minute from Sporting through Trincão’s curled effort outside the box. There was a quick turnaround for OM, thanks in part to a string of calamitous errors from the Sporting keeper Antonio Adán – the first of which was a pass out from the back which rebounded comedically off Alexis Sánchez for Marseille’s first goal of their Champions League campaign. It was followed by another, as Jonathan Clauss whipped in a delightful ball for Amine Harit to head home. A third was added by Balerdi from a corner, as the icing was firmly placed on the cake through Mbemba’s finish in the second half to make it four for the Olympians – who win their first game in the Champions league for two years.

Mbemba, 7 – A dynamic performance from the defender, who found himself in a lot of advanced positions all throughout the game. His finish in the 83rd minute was fully deserved, and the icing on the cake of an overly positive performance for the former Newcastle man.

Tavares, 7 – Another solid performance for Nuno Tavares in a Marseille shirt, with dynamism and high levels of energy down the left hand side. His runs caused Sporting problems, which led to fouls and cards – notably the one which caused Adán an early bath for the Portuguese side.

Harit, 8 – Amine Harit thrived in the first half for OM, and fully deserved his goal after his attacking intent and threat in the opening stages of the game despite being a goal behind. It was a smart but vital finish to put the home side in front and really complete the quick turnaround in goals for the Olympians.

Sánchez, 7 – It was a solid performance for the Chilean, who scored (albeit with a stroke of luck) in the first half to open the scoring for the home side. His performance troubled the Sporting defence on occasion, without becoming anything too special – he should have got his second after rounding the keeper in the second half, but hitting the side netting instead of scoring.

Others: Kaboré, 7 – After Johnathan Clauss’s injury you could be forgiven for being worried for Marseille, but Kaboré deputised extremely well on the right hand side for the Frenchman.

Adán, 1 –  A goalkeeping performance which put his side in complete jeopardy, one of the worst seen for a while here at GFFN. In the first half his mistimed pass out from the back succumbed to Alexis Sánchez’s close pressure as the ball rebounded into the back of the net. As Harit headed the ball in, the keeper was nowhere to be seen. It would have been forgiven had he not made the actions which followed. As the ball was played through to Tavares, Adán rushed out of his box – firstly wiping out his own defender in no-mans land  – but also mistiming his run as such that Tavares could head the ball towards goal. This was when he handled the ball outside the box and received his red card and deservedly so.

Trincão, 6 – He was the bright spark in a dismal evening for Sporting Lisbon which was littered with errors. His goal in the first minute was a delightful curled finish from outside the box. However, like the rest of his team, he faded out as the match gave way to Olympian dominance both in terms of possession, and the scoreline.

Others: Israel, 5 – After Adán’s red card he came on for what was his professional debut between the sticks, considering the circumstances, he did well to cope, despite conceding a Balerdi header shortly after entering the pitch.