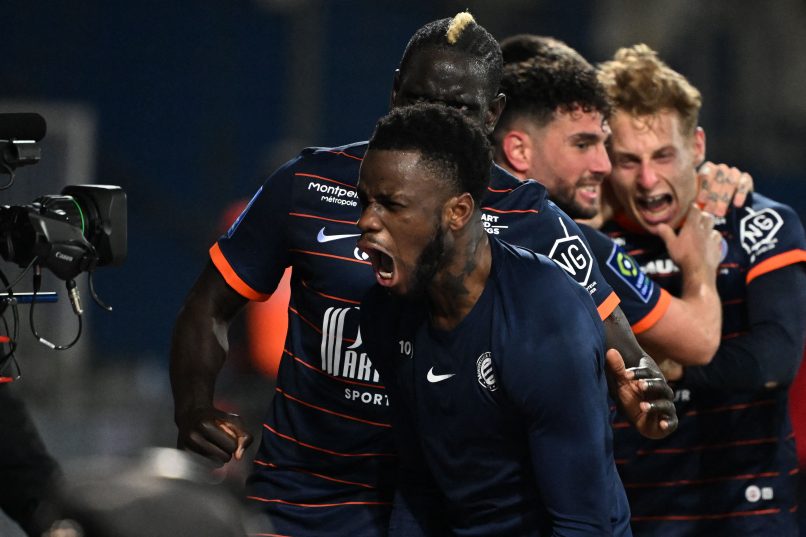 Arnaud Souquet, 7 – A persistent runner and useful outlet on his flank here and it was he who created the chance for the first goal by pinching the ball from Henrique in the right-back area before carrying the resulting counter. Made the most defensive actions for MHSC with 17.

Nicolas Cozza, 8 – Defended clinically and proactively all game and used the ball neatly throughout before creating the winner in injury time with a sharp interception and mazy dribble before slipping in Mavididi.

Jordan Ferri, 6 – One of Ligue 1’s more underrated players and was often a biting presence for Matazo and Lucas in midfield, it was he who pinched possession and fed Wahi to create the second goal.

Stephy Mavididi, 9 – Rifled home a skipping second from the edge of the area, smashed in an injury-time winner and produced the game’s highlight as he slipped between Disasi and Aguilar, forcing them to collide and megging Disasi in the process. His skill and attacking verve made him a constant threat, especially in the first half. Superb.

Elye Wahi, 7 – Produced a precise snap finish to open the scoring and did well to slip in Mavididi in assisting the second while being a nuisance for Monaco with his pace and astute movement throughout.

Caio Henrique, 3 – Has been playing as an attacking midfielder under Clement and looked uncomfortable on his return to left-back having been at fault twice for the opener, firstly by losing possession in attack and then by losing Wahi’s run who fired home at the end of the counter.

Aurélien Tchouaméni, 8 – Made more than double the shot-creating actions (9) that any other Monaco player and led his team in defensive actions with 12, which sums Tchouameni up at his best. A delicate dinked cross for Ben Yedder to head in for Monaco’s first was a highlight.

Wissam Ben Yedder, 7 – Played with a ferocity and intensity rarely seen under Kovac and was an elusive threat throughout as he dropped off the front. Added a neat stooping header for Monaco’s first.