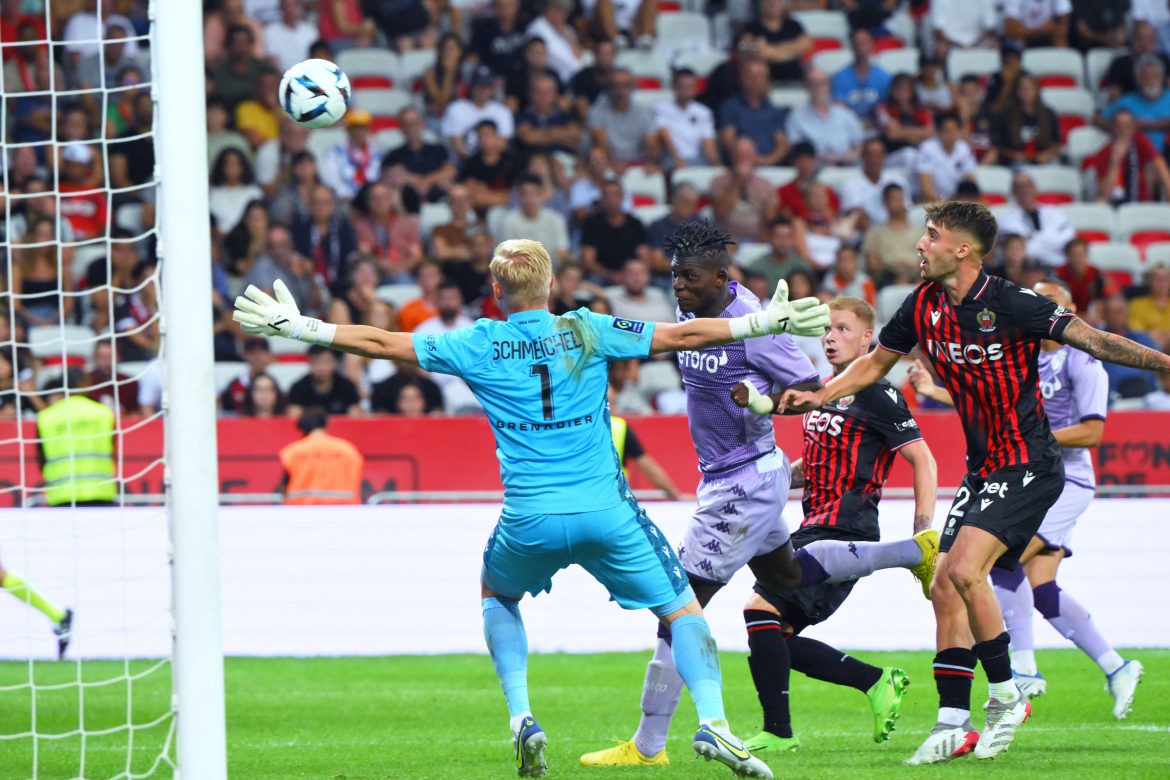 AS Monaco edged out local rivals OGC Nice at the Allianz Riviera in a tight tactical battle during which defences thrived. In a game devoid of chances, it would be the most clinical side that took the victory.

The game was decided by an outstanding moment of quality from Monaco left-back Caio Henrique, whose whipped cross was met perfectly by the head of Breel Embolo, who found himself marked out of the game for large periods of the fixture.

Monaco’s defence deprived Nice of time and space in the final third, successfully shackling the reunited duo of Gaëtan Laborde and Andy Delort. From two derbies in the space of just over a week at the Allianz Riviera, Nice have failed to take a single point and slip to 16th in the table. Monaco, meanwhile, jump up to 10th ahead of a crucial week where they will face Red Star Belgrade in the Europa League, before welcoming Lyon at the Stade Louis II next weekend.

Kasper Schmeichel – 4 – One shot, one goal for Monaco. The former Leicester City man was barely tested, but was beaten by Embolo in what was Monaco’s only shot on goal of the entire fixture.

Youcef Atal – 6 – He had looked promising at right-wing back and saw an early attempt saved by Nübel.  His surging runs from wide caused Monaco’s defence trouble, but his match was cut short by injury mid-way through the first-half.

Aaron Ramsey – 8 – A metronomic midfield force, the Welshman was key for Nice in possession. Initially alongside Thuram and then partnered by Rosario in the second period, he looked at ease and was at the heart of every sustained piece of Niçois possession. It was only Ramsey’s second Ligue 1 start for the club, but the signs of a Ramsey revival are certainly there. He was replaced just before the hour to a chorus of “Ramsey, Ramsey,” an indication that his performances are already winning over the Nice faithful.

Gaëtan Laborde – 4 – on his grand reunion with former Montpellier teammate Andy Delort, Laborde was kept quiet. He struggled to make an impact on the game and was restricted to only a few touches. With the possession he had, he was largely ineffective and unthreatening. It may take just a little time to reconstruct those automatisms with his strike partner.

Axel Disasi – 8 – The Monégasque defence was rarely tested but when it was, Disasi was often perfectly placed to sweep up the danger. The Frenchman has often been overlooked in favour of teammate Badiashile, but his impressive start to the season is turning heads. Complimenting his smart positioning is an aggression, which stifles attacks before they start and a calmness in possession, which allows his side to progress the ball from the defence and into the midfield.

Caio Henrique – 8 – In a tight tactical battle, the game needed a moment of magic to be decided and Caio delivered it. His sumptuous cross was perfectly met by Embolo at the back post. As he often was last season, the former Atletico Madrid man was once again crucial to Monaco’s attacking efforts, and he is beginning to also look defensively more assured.

Mohamed Camara – 7 – The Malian midfielder has enjoyed an exemplary start to life at Monaco. Despite not playing since June for RB Salzburg, he has fitted seamlessly into Monaco’s midfield pivot, and started three consecutive Ligue 1 matches for the side. He brings an element of aggression to Monaco’s midfield, which occasionally goes over the line, but which sets an example to his teammates. He brought an energy befitting of a big local derby.

Breel Embolo – 7 – The Swiss striker was largely marked out of the match, but made his presence felt at the crucial moment. He tucked away his only chance of the game to give Les Monégasques the win.