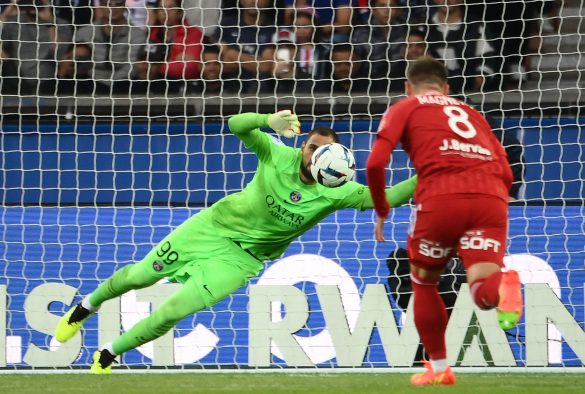 Paris Saint-Germain edged Brest to keep their lead at the top of Ligue 1 in a quiet affair for the Parisian side’s high standards following an eventful week in the Champions League for Christophe Galtier’s side. It was a European hangover – yet PSG did enough to get the three points after a lofted Messi through ball to Neymar was taken down wonderfully and finished effectively by the Brazilian. In the second half Brest grew into the game and troubled PSG’s defence. They earned a penalty, which Slimani weakly attempted but was saved wonderfully by Gianluigi Donnarumma – followed by some wonderful close range saves to keep PSG’s lead.

Donnarumma, 8 –  A second half performance that kept PSG in the game, a vital penalty save and a number of close stops really shows why Galtier thinks he’s the number one for the Parisian side this season.

Danilo 7 – In a position change into central defence he adapted well with confidence, placed in the middle of the back three. Showed a great deal of versatility and dealt with Slimani relatively well.

Messi, 7- Brilliant lofted assist for Neymar’s opener – his link-up play with Mbappé and Neymar is starting to get into full flow. Flourished in the first half but was quieter in the second.

Mbappé, 6 – Quiet game for the Frenchman, although tight margins dictated that he didn’t score he was close on a number of occasions after being offside. Below his rather high standards after a busy week in the Champions League.

Neymar, 7 – Really starting to find consistency in Ligue 1, brilliant finish from Messi’s lofted through ball and a thorn in Brest’s side for the duration of the match. His work-rate is once again spot-on under Galtier – although he could have tested the keeper more.

Chardonnet, 7 – Did well to keep Kylian Mbappé at bay with strong, experienced, and physical man-marking which kept Brest in with a chance until the later stages of the game. Commanded the backline well, showing good leadership and overly impressed the whole game.

Honorat, 8 – Really troubled the PSG defence all game long – along with Slimani he kept pressing the much-changed PSG backline and was physical with Danilo and Kimpembe. Was on the end of a number of chances created a lot of problems for Les Parisiens.

Slimani, 7 – Did well to press PSG’s backline, and got the chance to score to bring Brest level in the second half. His run-up was weak as Donnarumma saved – he will be really regretting that opportunity to score as his general performance was really satisfactory against a changed PSG side.