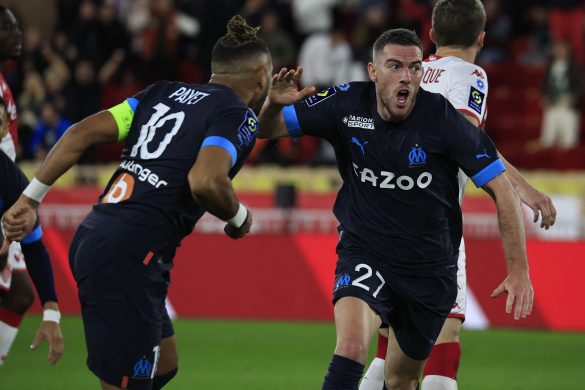 Aleksandr Golovin – 6 – Another strong playmaking performance from Golovin, who is arguably Monaco’s main creative outlet this season. His ball through to Volland for Monaco’s second goal was perfectly weighted and placed.

Wissam Ben Yedder – 7 – Ice-cold composure from the Frenchman from the spot. He had the audacity to pull off the panenka penalty, and pulled it off. It was a good response from the striker, who missed out on Didier Deschamps’ World Cup squad earlier this week.

Kevin Volland – 7 – The German striker is in a rich vein of form. He only had one chance on the night, but it was all he needed. He has found himself in a difficult battle for a starting spot with Embolo in fine form, but he is making an emphatic case for even more minutes.

Nuno Tavares – 4 – He had to do better with his early chance. The goal was gaping when he latched onto Clauss’ cross, but his sloppy finish was way off target. His form has dropped off after an incredible start to the season where he was providing goals and assists in each and every game.

Jordan Veretout – 7 – A great week for the former Roma midfielder, who backs up his call-up to Didier Deschamps’ World Cup squad with an equaliser against Monaco. He showed some nimble footwork within the Monaco box before blasting a powerful finish past Nübel.

Amine Harit – 6 – The Moroccan winger was a tricky customer. He still lacks the end product and should have done better having been played in by Tavares in the first half. He was subbed off around the hour mark with a horrible-looking knee injury, and he now, unfortunately, looks set to miss the World Cup, where he would have competed with Morocco.

Alexis Sanchez – 7 – The former Arsenal and Manchester United attacker gave Marseille the lead with a sumptuous free-kick, reminiscent of his prime Premier League days. Despite well-founded skepticism regarding his move to Marseille, but he now has seven goals this season, and has quickly established himself as the club’s most dangerous attacking option . His free transfer is now looking like a rather astute piece of business.