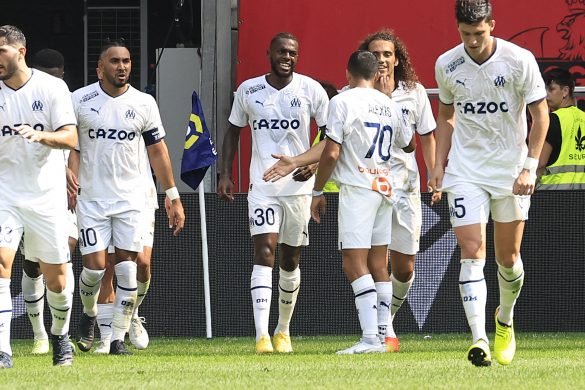 Bard – 3 – Marseille pinned Bard 2v1 throughout the match. Clauss was constantly on his outside, with Guendouzi and Payet also regularly flitting into his zone. His poor performance was largely born out of Marseille’s tactical victory down the right-wing.

Rosario – 3 – Perhaps the most absent of Nice’s three midfielders. Not only was he bypassed by the Marseille attack on numerous occasions, but he was also a source of attacking threat for the opposition. Out of step with his team-mates throughout, his loose passes often put his defence in trouble, especially in the first-half.

Pepe – 5 – a difficult debut for the Arsenal loanee. He looked dangerous at times, but ultimately lacked support from those around him to allow him to flourish. His only big chance came on the hour mark, but his curling effort from inside the box was easily saved by Lopez.

Ramsey 6  – a positive showing from the Welsh midfielder, who came on at half-time. He added an offensive element to a midfield that lacked any form of ball progression in the first 45 minutes.

Tavares – 9 – the best player on the pitch. He wasn’t tested defensively, but his attacking output made the difference. Like Clauss, he gave width to Marseile’s attack and his goal consolidates what has been an incredibly bright start for the Arsenal loanee. He could, and maybe should, have scored more, but he can once again be very happy with his contribution.

Payet – 7 – Much has been made of Payet’s absence, and on his first game back he staked a claim to remain in the starting line-up. Whether he was coming to feet or making runs in behind the Nice defence, he terrorised the two Nice centre-backs, none of whom knew how to deal with him. His link-up play with Sánchez so early on is also an undeniably positive sign for Marseille.

Sánchez – 8 – The former Arsenal and Manchester United man continued his bright start in a Marseille shirt by scoring his first goals for the club. Against an admittedly absent Niçois defence, he, alongside Payet, was the side’s main source of creativity. His first goal was finished in clinical fashion reminiscent of his best days at Arsenal, and the second showed a great striker’s instinct.

Bailly – 6 – untested on his debut. A perfect time to bed in and gain match fitness.