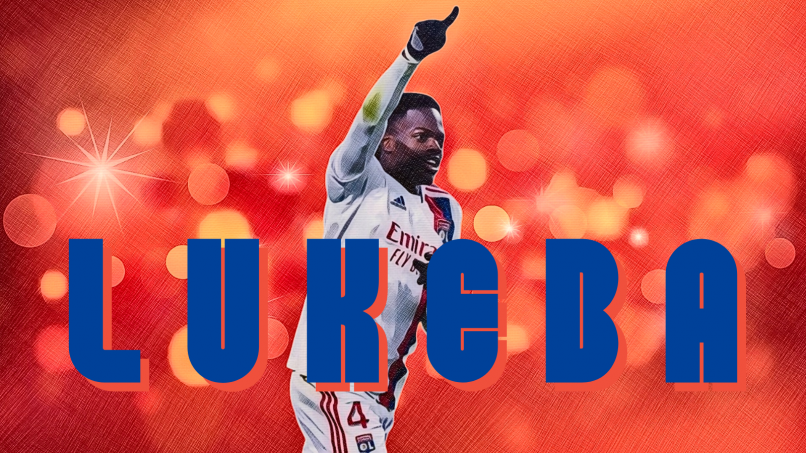 Lyon are renowned for their ability to produce and nurture young talents and turn them into superstars. Young centre-back Castello Lukeba’s rise from the academy to first-team regular this season is a prime example. At just 19, Lukeba has been one of the most eye-catching talents to breakthrough in Ligue 1 this season. Lyon have had some great defenders over the years and the Lyon-born centre-back could be the latest to join that group.

With the departure of Djamel Benlamri, Marcelo’s early-season exile and long term injuries for Sinaly Diomandé and Jason Denayer, OL have been light at centre-back this season, forcing Peter Bosz to look to the youth system for options. Lukeba was an obvious choice in add to his first team squad after impressing in pre-season with some confident performances, showing an ability to play out from the back and strong defensive awareness.

The French U20 international featured in the opening two Ligue 1 matches, a 1-1 draw with Brest and the infamous 3-0 defeat at Angers. Lukeba looked comfortable enough against Brest but his halftime withdrawal against Angers suggested that the step-up to competitive action may have come too early.

Despite an uncertain start, the centre-back appears to have gone away and worked hard at his game during a lengthy spell out of the first-team. It’s paid off with the Frenchman now one of the first names on the team sheet, featuring 16 times in all competitions this campaign. One thing every young player needs is confidence, and Lukeba has it in abundance. Since his break from the senior side, he’s acquired a calmness and bravery which sees him rarely shy away from a battle. He carries an air of effortlessness, rare in such a young player.

A main requirement for a modern centre-back is to progress play from the back – this is the most eye-catching part of Lukeba’s game. Boasting an impressive 75 passes a game with an accuracy of 92.4%, Lyon have one of the most promising ball-playing centre-backs in Europe at their disposal. Centre-backs can often be criticised for playing the easy pass but Lukeba is different. As Bosz likes to play on the front foot, Lukeba’s style of play makes him an obvious choice. He plays with his head up, looking for dangerous openings or Maxence Caqueret and Tanguy Ndombele ahead of him in midfield to help spring an OL attack. Progressive passing is a virtue for front-footed teams and Lukeba boasts five progressive passes per 90 minutes this season – high numbers for a centre-back.

From a defensive perspective, there’s still some naivety in Lukeba’s game which is understandable for someone so young. Positionally, however, he’s usually in the right place at the right time and even when he isn’t, he’s able to rely upon his incredible recovery pace – which has bailed him out on a couple of occasions this season. His ability to recover shows there’s a resolute steel to his game which provides security to left-back Emerson Palmieri, who’s often found in advanced positions. Lukeba’s left footedness is an especially desirable asset for a modern centre-back, as more is asked of defenders in playing with the ball at their feet, and creates an interesting platform for OL to build attacks.

He’s mostly been paired with former Bayern Munich man and Germany international Jérôme Boateng, this experience will be vital as he continues to develop his game – there aren’t many better centre-backs to learn from. However, in recent games, with Boateng dropped, Lukeba has been partnered with makeshift defender Thiago Mendes, making Lukeba the side’s defensive leader. Such trust shows how highly Bosz rates the 19-year-old.

Lightning recovery pace, on-point positioning, efficient and progressive passing plus bags of confidence means Castello Lukeba has all the makings of a top level centre-back. If he can continue his current trajectory, the sky is the limit for Lyon’s wonderkid number 4.