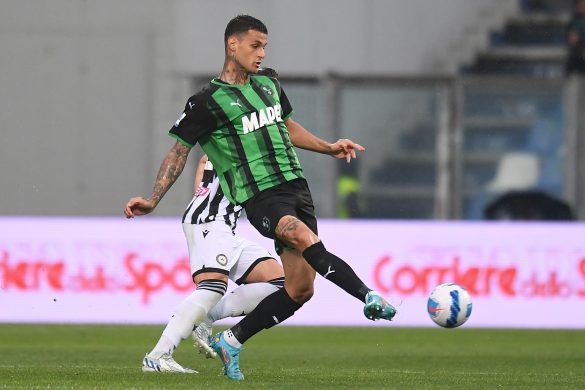 Le Parisien report this afternoon that Paris Saint-Germain are set to complete the signing of Italian striker Gianluca Scamacca from Sassuolo, with an imminent agreement estimated at the €50m mark.

The 23-year-old’s arrival from the Neroverdi will be completed next week. As confirmed by sources contacted by Get French Football News last week, the Ligue 1 champions had already agreed personal terms in principle with the forward.

The Azzurri international will become PSG’s second signing of the summer after Portuguese midfielder Vitinha’s move from Porto, the former Wolves man moving for a €40m fee.

The Rome native scored an impressive 16 goals this past Serie A season – doubling his tally from the previous campaign – and will be embarking on his second experience abroad after a spell in the Netherlands where he turned out for PSV Eindhoven and Zwolle.

It is hoped that Scamacca will be the agile target man around which the likes of Kylian Mbappé can play, in the same vein as the Frenchman’s association with Radamel Falcao at Monaco.