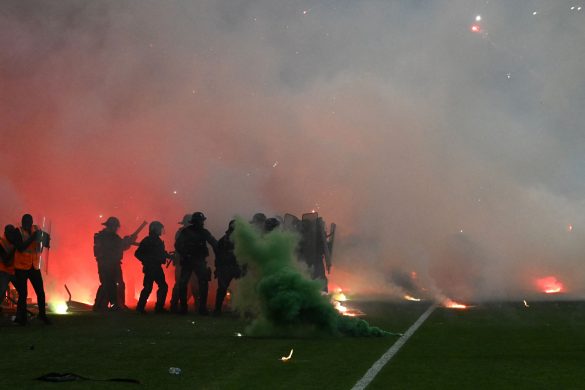 L’Équipe report today that eleven Saint-Étienne fans have been handed suspended prison sentences for the unrest that broke out after the club’s relegation was confirmed last season, at the end of their play-off against Auxerre.

Les Verts had finished in 18th in Ligue 1 after a cataclysmic season, and were to play against Ligue 2’s third-place side to remain in the top flight. After two legs, right as Auxerre captain Birama Touré had scored the winning penalty for his team, several supporters of the opposing side flooded onto the pitch and appeared to throw flares towards the executive boxes. The pitch invasion was then dispersed by the authorities with tear gas.

Those identified have been given two-month to one-year suspended prison sentences (along with two years’ probation for the individual who was given the one-year sentence). Two to five-year stadium bans along with bans on possessing firearms were also handed down. Each one of the supporters is also to pay a symbolic euro in compensation to both Saint-Étienne and the LFP, the governing body of France’s professional leagues. A request on the part of the city of Saint-Étienne for damages was rejected.