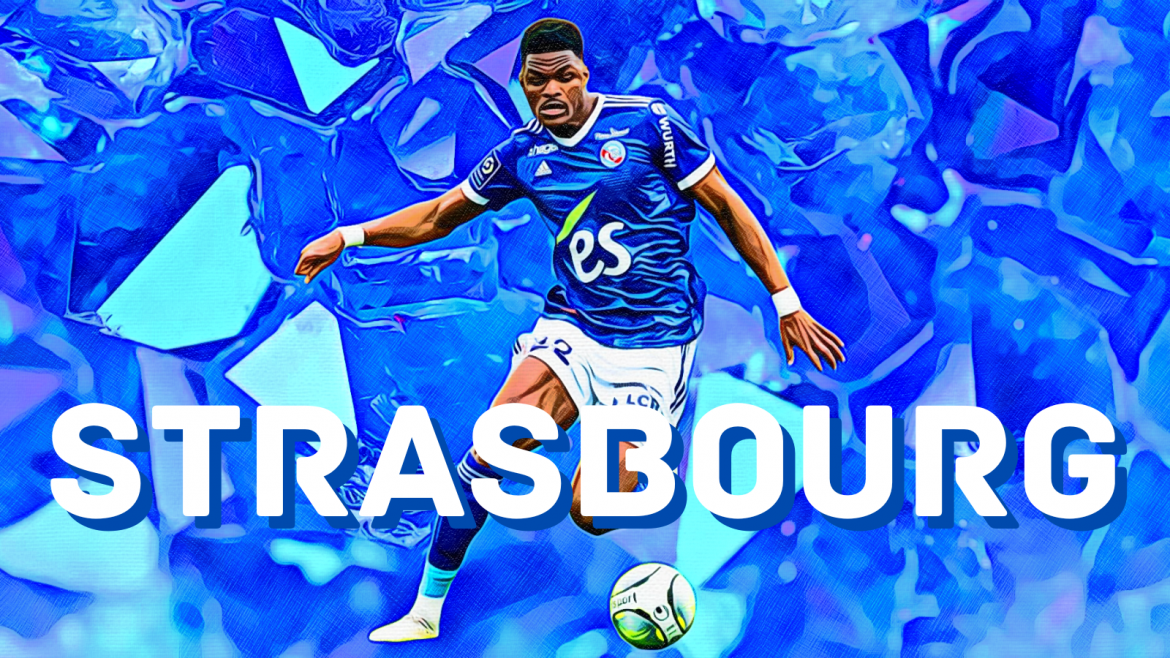 Having managed just 42 points last season, as fifteenth place saw Strasbourg only avoid Ligue 1’s bottom three by two points, Julien Stéphan’s arrival as coach saw Racing rocket up the table into the European race in 2022. Having played attacking yet physical football all season, their eventual sixth place (63 points) would have resulted in a Europa Conference place had Nantes not beaten Nice in the cup final. Few coaches did so much with so little this year. Here are Strasbourg’s four best players of the season ranked:

4th: Ludovic Ajorque (28, ST) – After a red hot start to the season, Ajorque struggled to have much of an impact in the second half of the campaign. The striker from Réunion managed 12 goals and eight assists, the majority of which came before January. The giant 6’6 forward is known for his work ethic and energy, ranking in the top 3% of strikers in terms of tackles per 90 minutes, and in the top 10% of strikers in terms of aerial duels won per 90 minutes from across Europe’s top five leagues in the last year, according to FBRef. Club President Marc Keller has given Ajorque permission to speak to other clubs this summer after four years of scoring goals for the Alsace club. It was reported that West Ham came calling in January but Racing were not willing to sell at that time. More recently, the 28-year-old has been linked to Lille.

3rd: Matz Sels (30, GK) – Since arriving in July 2018 from Newcastle United, the 6’2 shot-stopper has been a revelation. He was awarded the club’s player of the season for 2018/19 and came second in the vote for 2019/20 behind Adrien Thomasson. His clean sheet record was a key factor in Strasbourg’s end-of-season form, where they struggled to score as many goals as they managed in the first half of the season. He secured 13 clean sheets, a record only beaten by Walter Benitez of Nice, who managed 14. After being injured for the majority of last season, he has quickly rediscovered his form in Alsace.

2nd: Sanjin Prcić (28, DM) – The 28-year-old French-born Bosnian international midfielder has really stepped up his game this season, after struggling to impress in Alsace last season, starting just three games. This year he has had quite the renaissance, becoming a key player that Stéphan would utilise in 32 games. Prcić is a progressive passer, and although his assist and goal output does not look that impressive on paper, he did manage 5.48 progressive passes per 90 (putting him in the top 15% of midfielders in Europe) and 2.22 interceptions per 90 (top 18% of midfielders). His good performances earned him a new contract at the end of this season, signing for a further three years up to 2025.

1st: Gerzino Nyamsi (25, CB) – The solid centre-half has had an outstanding season, starting in the heart of the defence on 33 occasions this year, with an additional appearance off the bench. The 25-year-old, who signed from Rennes in the summer for just over £1m, had never completed more than ten 90 minutes in a single season until this year, which makes his career turnaround all the more impressive. He has been a key reason why Strasbourg have such a good defensive record, particularly in the second half of the season, when they managed an 11-game unbeaten run. Nyamsi’s good performances have put him on the radar of a few Premier League clubs, including West Ham and Newcastle United.

The flop of the season has to go to the extremely disappointing 4-0 loss to Marseille on the final day, which meant that Racing would miss out on European football for next season. All Strasbourg needed to do was match Nice’s result away at Reims, but after Nice came from 2-0 down to lead 3-2, Strasbourg seemed to capitulate. It was a massive disappointment for the fans and put a dark cloud over what was the club’s best season in Ligue 1 since the title win of 1980. It would seem that Strasbourg just failed to handle to pressure and the fiery atmosphere at the Velodrome, where home fans knew they needed to win to have a chance at direct qualification for the Champions League.

Overall Grade: A-minus – Every player in the squad has played a role in this season’s success. There’s not a single player that fans could say had a bad season. This Strasbourg squad has surpassed all pre-season expectations, many expected them to be in a relegation battle like last season when they managed to stay up on the final day. They were in and around the European places for the whole season, only to have their European dreams snatched away from them on the final day.