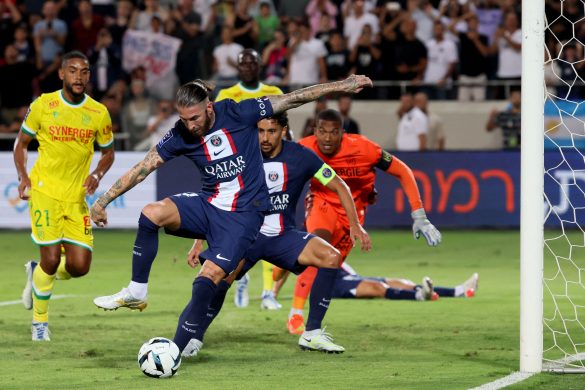 Speaking to Prime Video after Paris Saint-Germain’s Trophée des Champions win over Nantes, Sergio Ramos was in high spirits after scoring his first of the season with a clever back-heel goal.

His words transcribed in Culture PSG, the Spaniard also called for the team to continue using a three-at-the-back formation, which he considers to be the best way to get the most out of the squad.

“I’m very satisfied to have returned to play with the team and to have scored. It’s already a first final and a first trophy of the season. We ran a lot and even kept a clean sheet. It’s a magical night, a 4-0 win and a first goal for the season.”

“[On the three man defence] It’s very good! We used it a few times last season but not many. We’re going to keep working on it to memorise the movements, the timing and where to cover. It gives us stability and defensive security. I think it’s a solid defensive system because it allows us to play higher up the pitch. Playing with three defenders is good.”

“I’m happy to be playing again after a difficult campaign last season. I ended the season on a high, physically speaking, I was very well. I had a strong desire to get back to playing football. Now, gradually, I’m getting back to my best.”