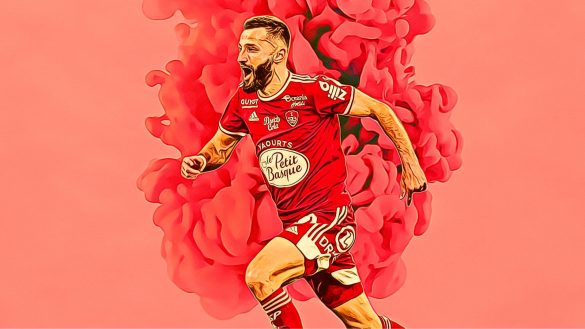 Key Man: Franck Honorat – In the ‘League of Talents’, few talents are as underappreciated as Franck Honorat. Having just turned 26, the versatile French forward has quietly and authoritatively carried the unfashionable Brest for more than two years. Last season, fellow attacking midfielder, the more skilful but flakier, Romain Faivre, undeservedly grabbed much of the attention from those outside the Stade Francis-Le Blé. When Faivre left for Lyon in January and struggled to find form, Honorat and Brest continued on their way as a solid and efficient midtable side capable of causing an upset. Honorat is an old-fashioned nuts and bolts attacker stylistically, lacking the grace and vision of the balletic Faivre, but his intensity, directness, intelligence and precise technical ability make him just as effective, if not more so. Playing for a lower-midtable side, his 27-goal contributions over the last two seasons makes for impressive reading and holding on to him this summer after strong interest from Germany will be crucial for Brest’s season.

Signing to Watch: Mathias Pereira-Lage – Much focus will be on the signing of relegated Premier League side Norwich City’s midfielder Pierre Lees-Melou. However, having been a surprise pick-up for an English side after he largely underwhelmed at Nice, a mid-table Ligue 1 club like Brest represents the right level for the 29-year-old water-carrier. Mathias Pereira-Lage’s arrival from Angers, however, could be significantly more useful. Having spent three seasons in Ligue 1 with Le SCO, Pereira-Lage oddly struggled to secure a consistent starting berth, despite his technical quality, particularly from crosses, and an ability to be equally useful across the midfield and attack. This snappy Brest team under Michel Der Zakarian, who often play with four overtly attacking players, will suit Pereira-Lage’s neat interplay, eye for a pass and whipped deliveries. Despite being a low-key arrival at a low-key club, Pereira-Lage’s signing should be seen as an astute piece of business come next May.

Transfer Window Analysis – Der Zakarian has built a well-balanced squad at Brest with two major late additions adding much-needed depth and extra quality. The first was once highly-regarded midfielder Mahdi Camara, who joined from Saint-Etienne. Although his form evaporated as ASSE struggled unsuccessfully against relegation, he has proven quality in this league and, still just 24, has room to develop. Islam Slimani’s move from Sporting is something of a coup for Brest, and their biggest signing in terms of stature for some years, maybe ever. Although he only enjoyed a small purple patch at Monaco before a hit-and-miss spell at Lyon, the 34-year-old is a major addition for a club of this size. Having kept Honorat, attacker Martin Satriano’s return to Inter Milan after a loan spell was the club’s only major loss while Lees-Melou and Pereira-Lage will add quality in midfield, meaning Brest leave the window stronger than at the end of last season. After a shaky start, Dutch international goalkeeper Marco Bizot has finally found the consistency to support a physical back four, that could still use a little more guile and depth while Der Zakarian’s variety of attacking options remains a strength.

Strengths – As is the case for all bottom-half Ligue 1 sides, finding a reliable source of goals is crucial for stability season-on-season. Brest, however, are unusual in that, beyond Honorat’s exacting finishing which produced 11 league strikes last season, they are home to a variety of genuine threats besides. Although in and out of form last season, the bulky former Huddersfield and Montpellier striker Steve Mounie added nine goals while Jérémy Le Douaron (5), Youcef Belaïli (3, in half a season) and Irvin Cardona (4) all ably assisted too while Slamani should be able to surpass them all. Der Zakarian boasts a group of waspish, skilful, pacey forwards who can interchange sharply, providing a variety of setup options. Top scorers amongst the bottom 11 sides last year, other than the bottom club, Bordeaux, Brest will be a tricky attacking threat once more.

Weaknesses – As one of the bottom half’s more expansive teams, as their 7-0 drubbing by a counter-attacking Montpellier proved, Brest can be exposed defensively. Despite finishing eleventh last season, only the bottom five teams conceded more than Brest’s tally of 57 and, with the departure of Ronaël Pierre-Gabriel for Strasbourg and Finnish international left-back Jere Uronen a little out of his depth in Ligue 1, Brest’s back four is looking increasingly agricultural. Having successfully converted central defenders Jean-Kévin Duverne and Lillian Brassier to full-backs last season, Der Zakarian is likely to effectively line up with four centre-backs. Although that has advantages, while centre-back pairing Brendan Chardonnet and Christophe Hérelle are often underrated, technical quality, outside Hérelle, is thin. As a result, Brest could be pinned back as they struggle to play their way out of trouble.

Verdict – Swapping like-for-like in the transfer market while adding some depth, Brest emerge from the transfer window stronger than they started it overall but with a settled squad. Der Zakarian will be hoping that such consistency extends to performances, maintaining at least the same middle-of-the-road form until next off-season. With a largely workmanlike but  experienced and efficient squad, that seems likely. Despite an uneven start, as a host of weaker sides fight over the four relegation places, Brest might be the only Ligue 1 club not to threaten either end of the table post-World Cup break in November.

Nathanaël Mbuku to remain at Reims, despite Fenerbahçe deal