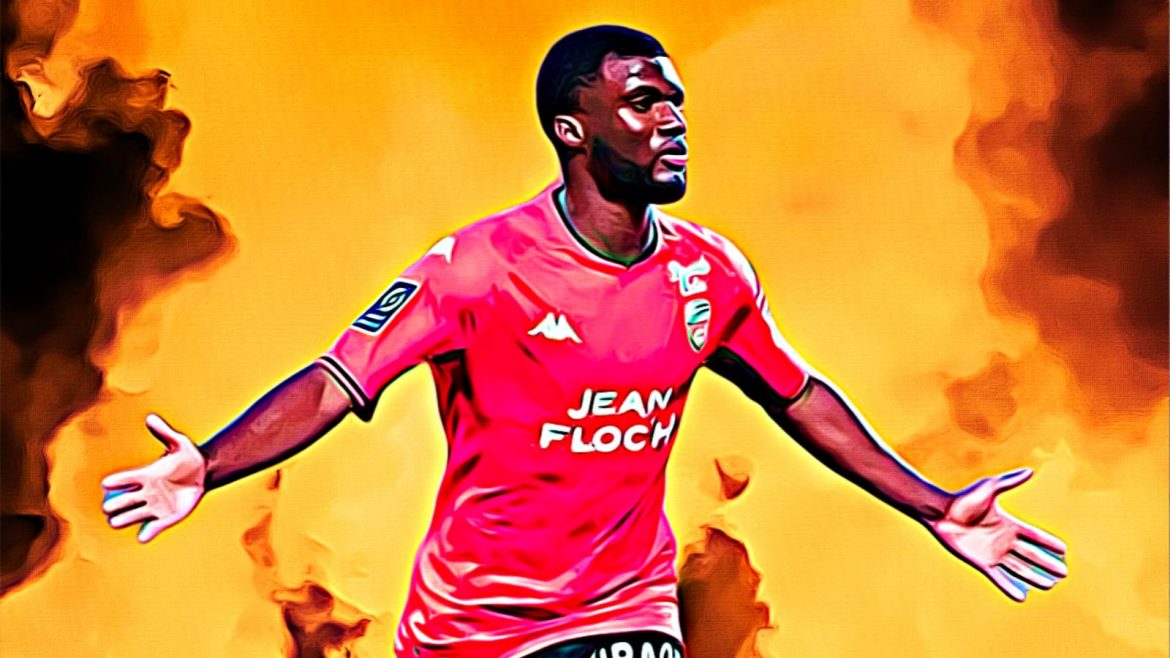 Key Man: Terem Moffi – Between Christmas 2020 and the end of the 2020/21 season, Lorient mustered 30 points, the fifth most in Ligue 1 over that period. Last season, however, much changed. Christophe Pélissier’s side managed just 16 more points in 2021 and endured a 15-game winless run into 2022. That undulating form largely correlates with the goal record of Terem Moffi. The Nigerian striker’s power, eye for goal and pace made him one of France’s most unpredictable and deadly forwards in the 20/21 campaign, managing 14 goals for a bottom-half promoted side. However, the now 23-year-old added just three more between August and March the following season, including a baron spell of 15 league games. Moffi looked overawed and devoid of confidence as his precise finishing disappeared with Lorient slipping toward relegation. Despite barely making it to 36 points, Lorient and Moffi showed signs of improvement this spring, however. Moffi’s brace in a 6-2 mauling of Saint-Etienne was a turning point for both player and club as the fire in his eyes seemed to rekindle and the striker ended the season with eight league goals. In a congested bottom half, Moffi’s goals could determine if Lorient survive in Ligue 1 for another year. Four goals before the end of August this season underlines his upward trajectory.

Signing To Watch: Gedeon Kalulu – At 24, right-back Gedeon Kalulu’s arrival in Ligue 1 is a little overdue. Having caught the eye for some time in the second tier, he’s been linked with several top-flight sides over three years with Ajaccio, despite his team’s wild inconsistency. An intelligent, skilful and composed full-back, both defensively and when overlapping, the powerful defender is ready-made for Ligue 1 but his best performances slowed to a trickle last season. He was even dropped briefly in the spring by Ajaccio coach Olivier Pantaloni, despite his team edging towards promotion. Even so, Lorient’s poaching of Kalulu is something of a coup, with bigger clubs likely put off by his recent inconsistency but, considering his talent, Kalulu remains an exciting prospect and may not be around long at the Moustoir if he returns to his best.

Transfer Window Analysis – The loss of four senior defenders, including the hapless Houboulang Mendes and veteran Jérémy Morel, means much of untested coach Régis Le Bris’ back line, outside the starting full-backs, looks shaky. The arrival of talented Monaco prospect Chrislain Matsima could become a shrewd move, however. Le Bris has a variety of attacking options, many of whom have threatened to offer consistent threat and creativity, but only Armand Laurienté was truly reliable and his late window departure for Sassuolo will rob Lorient’s attacking of much creativity and potency. Effective replacement Adil Aouchiche’s arrival from relegated ASSE is a major risk, given his inability to affect games consistently at Les Verts over the last two seasons, despite his talent and still being just 20. Despite an up-and-down season in Holland, goalkeeper Yvon Mvogo has proven a solid goalkeeping addition in a problem position for the club.

Strengths – Enzo Le Fée may be Lorient’s best hope of surviving the season. A graceful, technical creator, Le Fée was expected to adapt far quicker to top-flight football following FCL’s 2020 promotion, but the slight creator has been engulfed by an uncompromising league, out-muscled and outplayed. However, a bolder, more persistent Le Fée, now 22, produced some of his balletic best to help keep his team in the division at the end of last season. Playing with more intensity and a willingness to take responsibility, the new focused Le Fée could finally be ready to lead Lorient as was previously hoped.

Weaknesses – Lorient were fortunate not to be relegated last season, but Pélissier’s side were saved (even if Pélissier’s job wasn’t) by the woefully underachieving Bordeaux and Saint-Etienne. Although cajoling the best from Moffi will help, a tally of 63 goals against can’t be repeated if FCL are to survive this year’s four-team drop. Le Bris has moved to four at the back which will suit a pair of adept full-backs in Kalulu and the reliable Vincent Le Goff. However, having improved in a three-man set-up, leading centre-back Julien Laporte has never looked as comfortable as part of a pair and, with the unproven Montassar Talbi joining from Russian football, Lorient could suffer a soft centre.

Verdict – This is new coach Le Bris’ first senior head coaching role after he was promoted from managing the reserve and youth setups at the club. It’s a risky move considering how reliable Pélissier has proven here and at Amiens, but FCL are hoping that fresh ideas from a young, innovative coach will revitalise a flagging club and, so far, it has worked. Lorient won three of the first five games, including battling to beat Rennes. However, with Moffi’s consistency far from assured, little quality at centre-back and key creator Laurienté gone, by next summer, things could be very different.

Rennes manager Bruno Genesio: “Our politicians have a bigger responsibility than any coach”