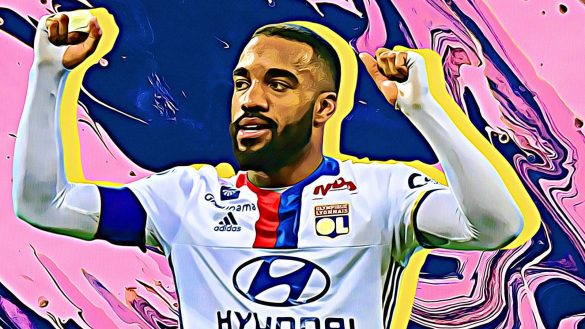 Key Man: Maxence Caqueret – Upon extending his stay at Lyon to 2027, Maxence Caqueret is central to a new era at Lyon. Last season, OL were a much better side with Caqueret in midfield but the 21-year-old’s importance was often overlooked as Lucas Paquetá’s skill and flair caught the eye. However, without Caqueret, it’s unlikely Paquetá’s form would’ve been possible. Comfortable in a two or three-man midfield, the Venissieux native was responsible for the majority of defensive interventions in Lyon’s midfield last season, most unseen and vital for ball progression, as he completed 25 pressures and over 5.5 tackles and interceptions per 90 minutes. Partnered with Bruno Guimarães before the Brazilian’s January departure for Newcastle, ball progression wasn’t a key task for Caqueret but he was able to adapt and launch attacks with impressive dribbling and progressive passing numbers. This season, Caqueret’s all-seeing, all-doing midfield performances could be key to a European return.

Signing to Watch: Alexandre Lacazette – The General is back. The hometown hero scored 129 goals for Lyon before joining Arsenal in 2017 and his return greatly enhances Lyon’s attacking prowess. Having lost his shooting boots at Arsenal towards the end of his time in London, spending time as a number ten – something Bosz hasn’t ruled out at OL, it will be interesting to see how he works with, or compares to, fellow striker Moussa Dembélé. Early signs suggest he still knows how to find the back of the net in Ligue 1.

Transfer Window Analysis – Lyon’s summer was mixed. Signing returning heroes Lacazette and Corentin Tolisso was an impressive feat without European football to offer, both bring leadership and nuance to a young team. The acquisition of defensive midfielder Johann Lepenant from Caen for €4.25m has gone under the radar but the 19-year-old’s technical proficiency and ability to control play has made him look like a bargain already. Nevertheless, there are still glaring holes in OL’s back line. Nicolás Tagliafico looks to be an improvement on Chelsea loanee Emerson but the erratic and aggressive Thiago Mendes, a midfielder by trade, has proven a weak link at centre-back. Failing to sign another central defender was an error. Right-back was strengthened by the promising Saël Kumbedi from Le Havre but, at 17, a lot rests on the youngster to deputise for Malo Gusto, who himself is inexperienced.

Strengths – OL’s strength lies in its array of attacking options. With Lacazette arriving and Dembélé staying, Lyon have two high-quality strikers. Shakhtar Donetsk winger Tetê re-signing on loan adds another quality option with the likes of January signing from Brest Romain Faivre expected to finally settle in and teenage prospect Rayan Cherki predicted to have a breakout year. Meanwhile, Karl Toko-Ekambi remains a genuine threat across the front line. Lyon’s midfield has been previously acclaimed as Ligue 1’s best and the attacking options of Houssem Aouar and Jeff Reine-Adelaide, who returns from injury, alongside all-rounders like Tolisso, Lepenant and Caqueret again bodes well.

Weaknesses – In pre-season, Bosz expressed concerns at the lack of a natural, experienced number six to aid Caqueret and help dictate the tempo. However, with Lepenant adapting well to Ligue 1 and Tolisso expressing a desire to play deeper, Bosz has workable solutions. Tagliafico removes issues at left-back but defensive gaps still exist. With Jason Denayer gone, Jérôme Boateng out of favour and Damien Da Silva ageing, Lyon lack quality at centre-back beyond youngster Castello Lukeba and the promising, but regularly injured, Sinaly Diomandé. Mendes has created chaos at the back in recent matches and the failure to not recruit another defender looks costly as does, despite a plethora of options, the lack of a Paquetá replacement. The Brazilian was everything good about Lyon at his best and his presence is already being missed.

Verdict – Lyon have improved this summer overall and the impending arrival of new owners evokes renewed optimism. It could be a case of hometown glory if academy graduates and returning duo of Lacazette and Tolisso continue to impress. It remains to be seen, though, if Bosz can get the best out of this squad after last season underwhelmed. The former Leverkusen boss needs more balance and cohesion if he wants to avoid a repeat plus renewed pressure on his position, which has already amped up after recent results. Attacking quality and no European football will surely see Lyon compete for the podium but defensive insecurities could be their downfall and may see Bosz’s side just miss out.