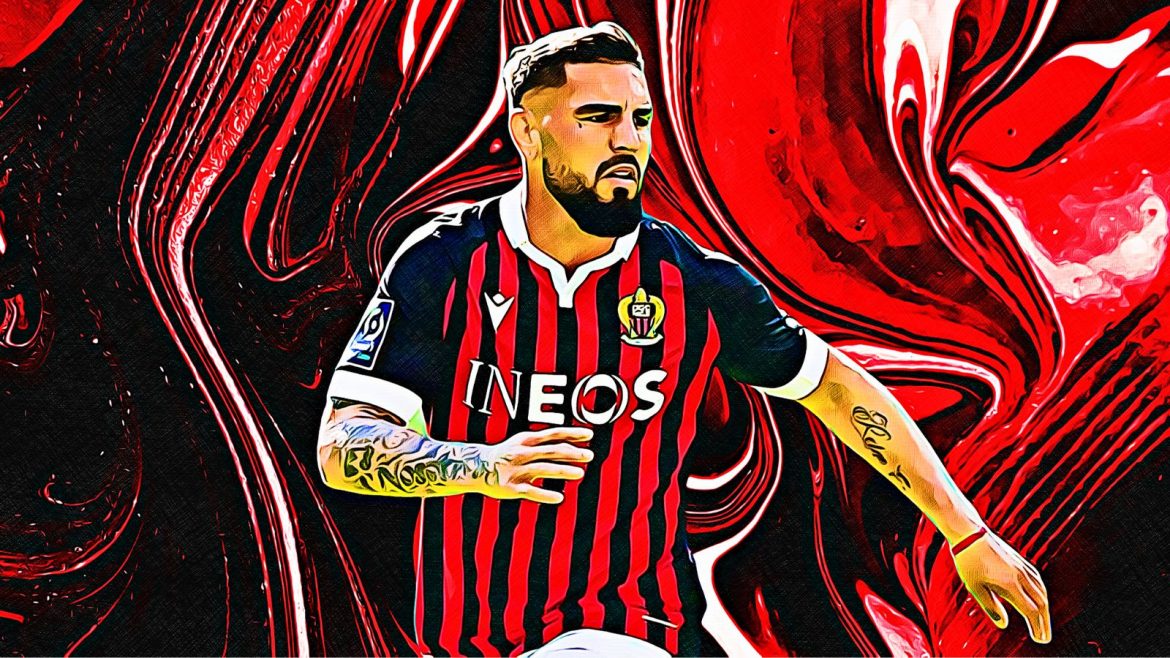 Key Man: Khéphren Thuram – Nice have made 13 new signings this summer, which, given Lucien Favre’s return as coach and the departure of sporting director Julien Fournier, gives a feeling of a side in transition. Last season, Nice could count on the spine of their team: centre-back Jean-Clair Todibo, midfielder Khéphren Thuram (especially in the second half of the campaign) and Andy Delort up front. All must hit the same notes if they are to have a successful campaign. Todibo is once again paired with the ageing Dante, as well as Mattia Viti, who arrived from Empoli this summer in a defensive back three. His form will be crucial, but arguably not as crucial as Thuram’s who is the only element of continuity in a much-changed midfield. Pablo Rosario remains at the club, but he has seen his playing time reduced so far this season. Thuram will likely be an ever-present in the side, however, he will be joined by new faces in the form of Aaron Ramsey, Ross Barkley and Alexis Beka Beka. Thuram will have to build an understanding with all of them to keep a semblance of midfield coherence. The way that the young Frenchman handles that will be a determining factor in Nice’s progression this season.

Signing To Watch: Sofiane Diop – Nice have, on the face of it, adopted a scattergun approach to this summer’s transfer window, however almost all of their signings share one commonality – they were all available. Sofiane Diop was certainly on the market. Diop was a mainstay at Niko Kovac’s Monaco, but he fell somewhat out of favour under Philippe Clement at the turn of the year. An eccentric and exciting dribbler, the promising France U21 international saw his playing time constricted in the second half of the season. Despite that, Monaco still wanted to keep the player but, according to Clement, Diop was keen on the move to local rivals Nice, and the club didn’t stand in his way. At just 21, Diop has the enticing combination of Ligue 1 experience and potential. He’s still raw, with some questionable decision-making in the final third, but, should Favre improve that element of his game, he has the technical ability to become an elite forward. At Nice, he should get the necessary minutes to develop. Combined with Nicolas Pépé, who arrived on loan from Arsenal, Nice now possess a set of wingers that should, in theory, cause huge problems for even the best sides in Ligue 1.

Transfer Window Analysis – In numerical terms, the squad is well armed, but do they have the quality? Rumours persisted all summer that the club were looking for an experienced centre-back, largely to reduce the load on Dante, who turns 39 in October. However, no transfer materialised. Mattia Viti is a promising young player, but more was needed in that department. The club were also reportedly hoping to bring in a first-choice left-back to replace Melvin Bard, but the arrival of Joe Bryan on loan from Fulham is unlikely to displace Bard in the short term. Nice can call on any number of midfield combinations, although the coherence in that area of the pitch may be an issue. Last season, Andy Delort was by far the club’s top scorer with 16 goals, but the arrival of former strike partner Gaëtan Laborde should significantly reduce their reliance on the Algerian international.

Strengths – The arrival of Lucien Favre has signalled a mood change at Nice. Whilst he has re-enthused fans, his influence on the pitch is where his impact will be felt most. Too many of the talented elements of last season’s squad looked lost in Christophe Galtier’s rigid 4-4-2 system. The freedom that Favre will bring should work to the benefit of many of those players. Whilst that has yet to manifest itself on the pitch, perhaps due to the large turnover in the playing staff, there’s an overriding feeling that Favre will be able to construct a more coherent attacking unit than his predecessor. Hindsight adjudges his spell in Dortmund to be nowhere near as bad as first perceived, and, coming back to Ligue 1, to the club where he shone brightest, he has the potential to take this group to the next level.

Weaknesses – Cohesion. The squad turnover has been significant, and Favre’s apparent lack of influence over recruitment is a worry. He has plenty of elements at his disposal, but can he make them all fit? Furthermore, given the depth and sheer quantity of players, can Favre keep them all happy?

Verdict – The season began with optimism, largely due to the return of the much-adored Favre and the radical departure that he represents from the turgid football under Galtier. A poor start to the season has burst that bubble. Although sealing Europa Conference League football via the qualifiers is a huge plus, it could quickly turn into a negative as handling midweek European excursions could easily come at the expense of league form. Nice should be able to turn it around and compete for European football given the quality in the squad and on the touchline, but a rapid ascent to the higher echelons of European competition doesn’t look to be forthcoming just yet.