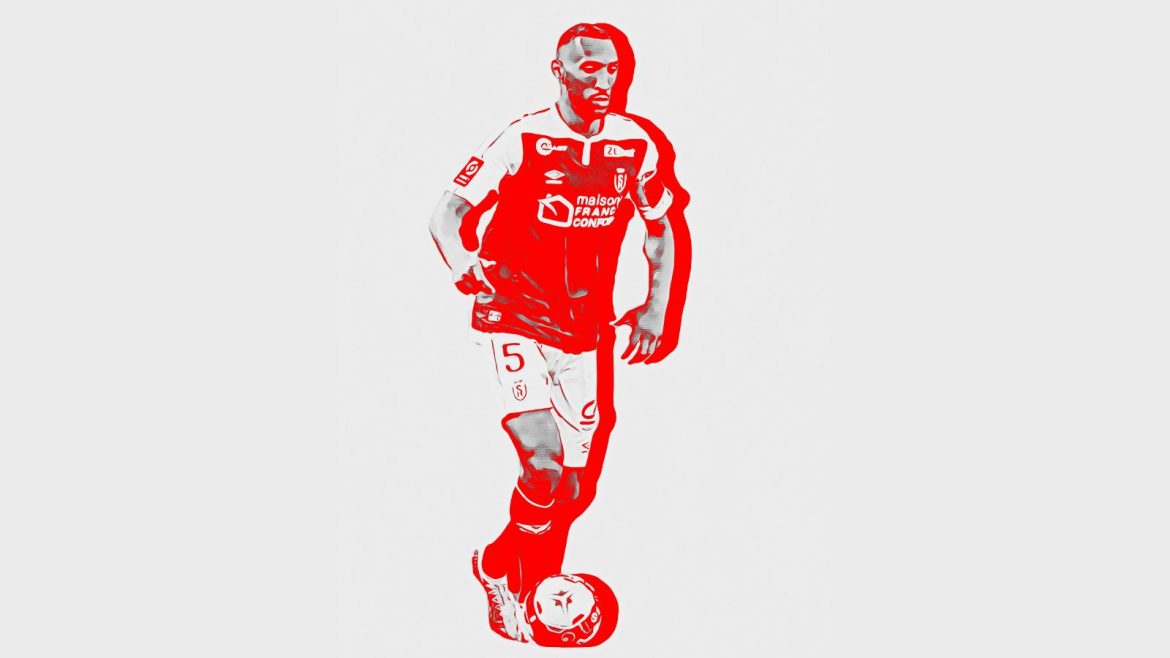 Key Man: Yunis Abdelhamid – A pivot towards the academy meant many of the club’s more established players were moved on last year but 34-year-old captain Yunis Abdelhamid has proven far too important to be sacrificed in the name of youth development. Under previous coach David Guion, Reims finished 8th and 5th in 18/19 and 19/20 respectively following promotion as the Moroccan international became one of the league’s most reliable centre-backs. In the 2019 GFFN 100, Abdelhamid finished 19th, the highest placed defender not to play for PSG. Although his form has plateaued since, as a physical, intelligent and considered presence, he’s helped nurture his young partners through difficult moments and been a key Lieutenant for current coach Oscar Garcia. With his impressive partner Wout Faes (24), who’s shouldered much defensive responsibility of late, moving on to Leicester City this summer, Abdelhamid will be more important than ever as he trains a new apprentice, possibly his last for the club.

Signing to Watch: Junya Ito – As Reims’ president Jean-Pierre Caillot pointed out, the signing of the 29-year-old Japanese international Junya Ito from Belgian club Genk was an unusual one for SDR. Having almost exclusively focused on youth, both from the academy and in their recruitment, of late, the arrival of Ito adds much-needed experience and established attacking verve to Reims’ forward line. Although the Champagne club have produced a group of skilful young forwards, their attack hasn’t seen the same success as other areas of the squad and Ito is already providing a reliable source of creativity after the winger managed 21 assists in 49 games last season.

Transfer Window Analysis – Having built a well balanced squad, Reims’s success this season will be broadly based on two key aspects of their philosophy. Firstly, a continued ability to identify low-key, cost-effective talent, often from Belgium or Holland, capable of handling the physicality and quality of Ligue 1. Last summer’s signing of Azor Matusiwa, a 24-year-old technically gifted, mobile and efficient defensive midfielder from Groningen, cost just €4m and he quietly became one of Ligue 1’s leading sentinels. The club’s scouting department needs similar successes from Patrick Pentz, who’s joined from Austria Vienna to replace the safe hands of Predrag Rajković in goal, and Faes’ successor at the back, Emmanuel Agbadou, formerly of Eupen in Belgium. Secondly, Garcia will be hoping his academy talents are ready for more responsibility. Despite the youth policy’s success, Hugo Ekitike aside, few grads played a leading role last season and, as they grow, Reims will be looking to fill gaps in their typical eleven with those youngsters. For example, 20-year-old left-back Bradley Locko will be expected to replace the solid Ligue 1 stalwart Ghislain Konan who left for the Middle East this summer. Only part of the rotation last year, are he and others ready?

Strengths – Garcia’s arrival as coach last summer signalled a switch in philosophy. Experienced players were marginalised or sold as Garcia delved into the club’s modern academy set-up. Trusting a group of unproven teenagers was a sizeable risk that paid off with various low-key success stories alongside headliner Ekitike who drew €30m bids from England as early as January before leaving for PSG. That policy will continue to compliment the first team this campaign with midfielder Kamory Doumbia, who impressed at the end of last season, and the technical Martin Adeline two teenagers looking to break through while large sections of the squad are still 22 or under and developing fast. More breakthroughs like Ekitike’s seem very possible.

Weaknesses – Having lost Ekitike, who scored ten times in the league despite being in and out of the team last season, Reims lack goals. Although their youth system has produced a group of exciting young attackers, none of the rest have truly cemented a place in the eleven and, behind Ekitike, the second top scoring forward only managed two goals last term. Ito’s addition is promising after eight goals for Genk in Belgian last season but Ligue 1 is a far more pragmatic, physical division and the Japanese international can’t be relied upon to score the goals to keep Reims up. Folarin Balogun’s arrival on loan from Arsenal is designed to add the goal threat El Bilal Toure failed to provide before he move to Spain at the end of the window. The 21-year-old Englishman has started well in France, scoring fives times in his opening seven games.

Verdict – Given their apparent lack of quality at the start of last season, surviving to 22/23 at all was a major achievement for Reims, but doing so in midtable mediocrity was a minor miracle. With his youngsters a year further along the development path, Garcia will be expecting similar results from his stoic yet dynamic side, and he’s likely to get them. However, the success of more experienced signings to complement those talents, like Ito, remains key and, with four teams being relegated this year, Reims could be looking down rather than up if everything doesn’t go to plan.