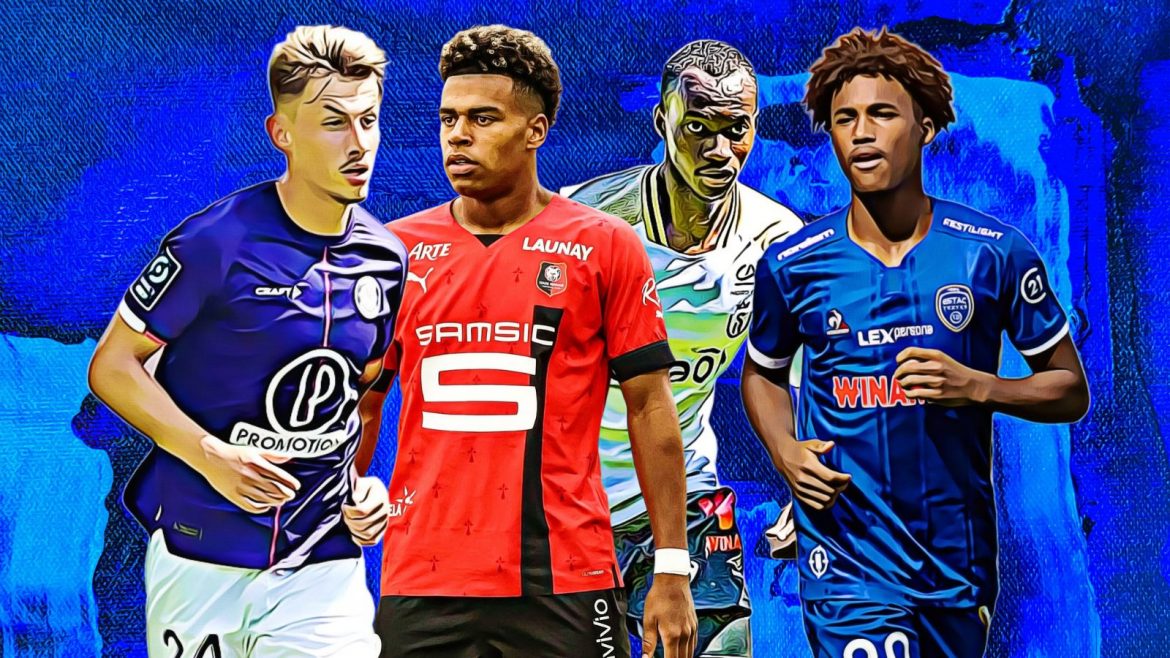 This is taken from the GFFN 100, our leading 150-page FREE publication ranking the best 100 players in France, see the full list and read every profile right here.

David da Costa, RC Lens
Born in Portugal, da Costa has been with Lens since 2013, his family having moved to France when he was just nine, and his slow-burning improvement has continued apace this season, having signed his first professional contract in 2019. Now an undisputed starter for a team who have been impressive front to back this season, having displaced Gaël Kakuta, the diminutive da Costa is comfortable pulling wide or driving at players centrally, at once supporting the team’s attackers and creating space for them. With pace to burn, his flashy, high-energy style is a perfect complement to the team’s approach.

Anthony Rouault, Toulouse FC
The youngest member of the promoted side’s back four, Rouault has often been its most impressive, having notched more than sixty appearances for the club since making his debut in 2020. A foot injury slowed his progress towards the end of 2021, but this year, he’s barely missed a match, showing himself to be a commanding presence in the air, and a canny operator in the tackle — he has yet to receive a booking this season. Relatively fleet of foot for a centre back as well, Rouault also has shown an impressive range of passing, and looks to be one of what’s fast becoming an impressive crop of young French defenders.

Farès Chaïbi, Toulouse FC
Since returning from an appendectomy in late August, Chaïbi has been integral to Toulouse’s attacking play, despite having just turned twenty. A creative player with a deceptive level of strength, even as Les Violets have struggled at times to adapt to life in the top flight, he has scarcely seemed out of place. For a player whose professional debut only came at the beginning of the season, he has been mightily impressive, notching two goals and adding four assists, his ability to play in multiple positions helping the team manage a variety of absences. Expect plenty more to come from Chaïbi, particularly once the team’s top flight survival is closer to being sealed.

Désire Doué, Stade Rennais
The youngest player on this list, Doué is also the one from whom the most is expected. Just 17, he’s already scored three times for Rennes this season, an impressive return given the collection of more established attacking talent at Bruno Génésio’s disposal. There is still much to be fine-tuned about his game, but his versatility and eye for goal mark him as one for the future. Comfortable anywhere from a box-to-box role to playing off of a central striker, Doué has creativity and fearlessness to spare, and has become an increasingly important option for Génésio off the bench, a trend which should continue apace in 2023.

Kamory Doumbia, Stade de Reims
A product of the same Malian academy, JMG, that has also produced Cheick Doucouré and Hamari Traoré, Doumbia has impressed for Reims despite his youth and having to play in a rather thankless position, although the latter of these could be changing. In the early part of the season, he played behind the duo of Junya Ito and Folarin Balogun, and was often forced to spend more time pressing than using his ability on the ball. However, since the start of Will Still’s tenure as head coach and the attendant switch to a 4-2-3-1, he has prospered as an orthodox ten, linking play and showing his ability on the ball more readily — there’s more to come from Doumbia.

Lucas Chevalier, Lille OSC
Ligue 1 is currently home to a pair of goalkeepers known for their extreme precociousness in Alban Lafont and Gianluigi Donnarumma, still both just 23, but in a position not known for young players breaking through, Chevalier could be making a go of joining them. Since his replacing Léo Jardim in goal for Les Dogues, the team have repositioned themselves as a bona fide European contender, losing only to Marseille, Lyon and Lorient. Some of this is down to the team’s attacking prowess, of course, but Chevalier’s saves and sense of occasion will have played their part as well.

Wilson Odobert, ESTAC Troyes
Might Odobert be another of the seemingly legion number of players who fall under the category of the one who got away for PSG? Despite playing in a rather moribund side, in terms of their attacking prowess, the winger, who was just 17 when the season started, has flourished, not only becoming Troyes second-youngest goalscorer but regularly displaying an uncommon ability on the ball. With five goal involvements in just under 700 minutes — no mean feat given Troyes’ tactics — he has even kept players like Rony Lopes and Renaud Riaprt out of the team, underscoring that he is a player for the present and the future.

Maghnes Akliouche, AS Monaco
A regular presence in Monaco’s squads and indeed even starting eleven at times since the arrival of Philippe Clement, Akliouche can play either wide on either flank or centrally as a number ten. Gifted with a fine eye for a pass, and a deceptive strength despite his wiry frame, he has been helped by injuries and fixture congestion for the Monégasques this season, but there’s no doubt he’s coming into his own, having scored four times and added three assists for France’s U-20s as well. Another player who could perhaps do with a loan spell in Ligue 1, his creativity could help any number of struggling sides.

Théo Le Bris, FC Lorient
Given Le Bris almost made the 100, he was one of our easiest choices to make for the ten to watch. The nephew of manager Régis Le Bris, he has impressed in a number of positions, filling in for Gédéon Kalulu when the former Ajaccio right back was injured, and more recently on the left wing. A precocious talent who was a regular for the reserves at 17, he’s a willing runner, an adept tackler and inventive with the ball at his feet. He still needs a bit of polish, especially in his defensive positioning, but he has all the makings of an archetypal live-wire fullback.

Matthis Abline, Stade Rennais
Abline is a player who’s been threatening to break through at Rennes for some time, having made his professional debut just weeks after his 18th birthday. The arrivals of Martin Terrier, Arnaud Kalimuendo and Amine Gouiri have blocked his path, but he sparkled in a loan spell with Le Havre last season, scoring six goals in sixteen matches. After impressing with the U-20s as captain, he’s also been capped for Les Espoirs, netting in his first start and has scored for Rennes as well, including in the Europa League. A skilled dribbler and an astute finisher, Abline could well be in line for a loan to a Ligue 1 club this month, as he looks increasingly a complete attacking player.