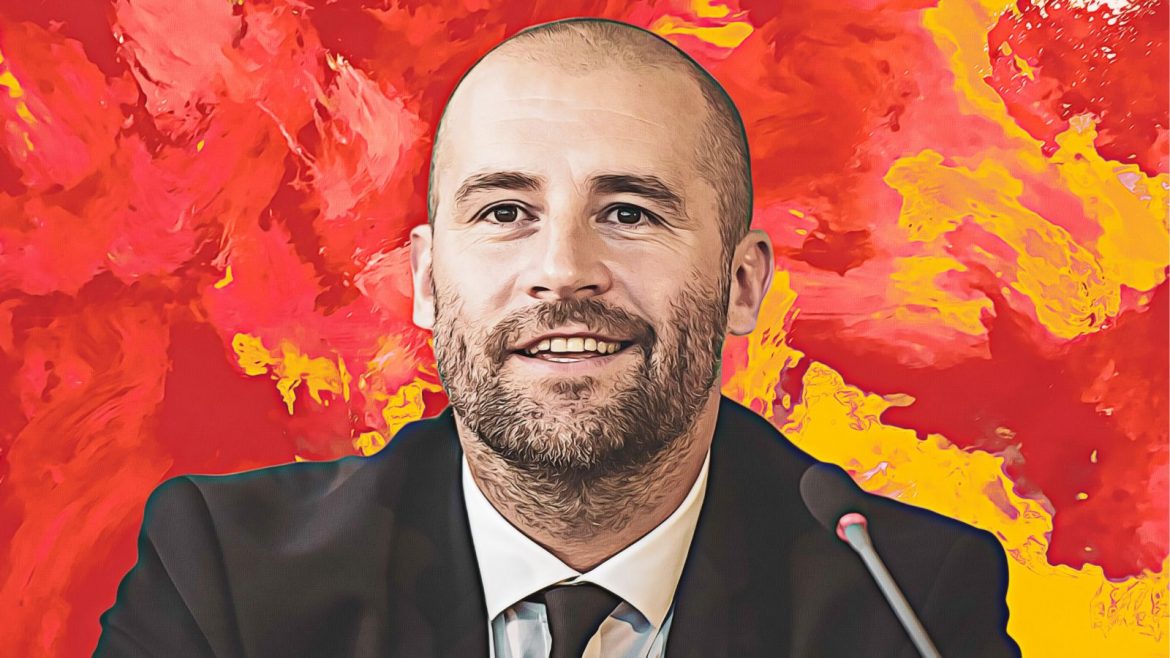 AS Monaco academy product Benoît Badiashile is the latest player to have established himself in the first-team before departing the Principality for a considerable fee. Both he and Aurélien Tchouaméni, who left for Real Madrid in the summer, incarnate a return to what Sporting Director Paul Mitchell has previously described as a “historic strategy”, which holds the development of youth players at its core.

In light of the emergence of a new generation of Monégasque talent, spearheaded by Eliesse Ben Seghir, Get French Football News’ Luke Entwistle spoke to Mitchell about making youth the “centrepiece” of Monaco’s strategy once again, the strengths of Ben Seghir, balancing youth development and results, and the Principality club’s place in an increasingly defined European footballing hierarchy.

With the emergence and subsequent sales of Tchouaméni and Badaishile, there is a marked return to what you’ve previously described as a “historic strategy” of developing young talents. Do they incarnate the philopsihical shift within the club?

I think when we arrived two and a half years ago it was well-documented that we lost a bit of focus and vision on our strategy. One of the elements that we recognised was mainly suffering was the academy. There weren’t as many academy players moving from the academy platform to the first team. We were externally recruiting en masse, we spent an awful lot of money, and it was one of the key topics and objectives that the owner set for me when he hired me to become the Sporting Director. Benoît and Aurélien are interesting profiles because, in the game before the Covid break, they were both substitutes so it’s really intriguing. From a strategy that had lost its way a little bit, you recalibrate, you apply these principles of performance and clarity around wanting to develop talent like Monaco historically has, and you take that player from being a substitute to playing for one of the biggest clubs in the world.

How is Badiashile in particular suited to play in the Premier League? How has he been profiled and developed to play in what is by many deemed to be the best division in the world?

I think there are lots of underlying principles with some of the practitioners that have been exposed to the Premier League. We have an English contingent while being very balanced with some great french practitioners so we have an understanding and a depth of knowledge of when we were in the Premier League, what we would look to sign and ascertain a profile that can be successful. We use that as a template when we recruit or when we’re developing our academy players because the Premier League is still the undisputed biggest league in the world; it is certainly the biggest spender year-on-year in the transfer market. It is prudent for any business model that wants sustainability to build profiles that can be positively analysed, reflected and scouted by the biggest clubs in the Premier League.

Eliesse Ben Seghir is the latest to come through the club’s prestigious academy. To what do you attribute his relatively rapid rise?

We wanted to develop a diverse game programme that reflected the challenges of first-team football and the first-team players of Monaco. Monaco regularly plays in European football, regularly plays under the challenge of the league and the cup. You have a diverse game programme playing teams from multiple countries with multiple challenges so we wanted to create that diversity so when a Ben Seghir comes to the first team, he isn’t travelling to Germany for the first time, learning how to travel, how to recover, how to rest, how to prepare for a game in another country, so we wanted to arm our young players with more tools, more weapons so that when they make that step into the first team they better conditioned, better aware and better prepared to be successful.

Could you describe his strengths as a player?

I think Ben Seghir is a modern offensive profile. He is one of those players that can play in multiple positions. The principles of work that we promote within the elite development group is also for such a creative offensive player is also one of the reasons that he’s gained that confidence with the coach. His out-of-possession football is something we work tirelessly on with some of our more creative players, and what Ben Seghir has shown over time is that he has taken those principles of work from the six months with the elite development group and implemented them in that step-up to the first team. That work has been really fruitful. He definitely is that modern offensive profile. He is fearless in possession, he’s not scared to take a risk, to try and get past, to penetrate. Already as a young man, he is a bit fearless. What I like about him is – and this is a really good sign of what could be to come – when the team is under pressure to find solutions, he is more than open to taking that responsibility at the age of just seventeen, to go into tight areas, areas of the final third that are dangerous, that are tight and find the solution.

In the end be the guy that is responsible, not give that responsibility to a Golovin at 26 or a Minamino, be the guy. That definitely is very exciting. But also the defensive work. We often mitigate the responsibility of creative offensive players out of possession What you see with Ben even for the first goal against Lorient, his natural reaction to press and put counter pressure on Lorient, creates the turnover that we score from with Embolo so for such a young man, he is already showing really exciting traits. But with every talent, there is a management aspect. We have to be careful not to put too much onus, too much stress and we create the right timeline, the right exposure at the right moment because there will be dips, he’s 17, and I think we have really set up a structure here that is very development focused, very conscious of those things. Like we did with Benoît, like Aurélien, we’re going to see Ben Seghir’s exponential growth in the next few years.

How do you balance the need for results, whilst also bringing through these young players?

It’s a hard one to facilitate it really is. It’s not easy. We do have those two balanced objectives here: we have winning in context as Monaco football club and everything that represents, but we also have that other major objective as well and that is to develop young players. One thing that you learn having done this for a long time and having developed players through this strategy, is that sometimes the games that aren’t so good, the moments that aren’t so good, the bad decision-making, the mistakes, help that player learn more effectively and quicker than the great games that they have. You have to, and the club as an organisation from the president to myself, to the board, have to understand that is our model, understand that is our strategy, and also create a balancing effect when we’re measuring what our outcomes are relative to our objectives.

You’re going to have moments when you move from your performance cycle that includes players like Aurélien and Benoît, maturing and allowing you to win football matches, when those players leave, you naturally, in a strategy like this, replace and you move back into your development cycle with a Ben Seghir. It is part of my job, the ownership’s job when we create those strategies, also create an understanding, an acceptance in a way. That’s about communication. It’s not always easy. All of us are ambitious, and all of us like to win, but we made a really conscious agreement two-and-a-half years ago – the owner wanted to get back to putting the academy back as a centrepiece of this organisation, in getting back to developing players with the capability and capacity whether they come from the academy through the elite group, or we sign them externally and they come into our environment for two or three years, they grow to the level that they can play for some of the biggest clubs in the world.

What is satisfying after this period is that we’re achieving those objectives: 13 academy debutants in the last two-and-a-half years, we have a really exciting group of talents from Edan Diop, Mohamed Coulibaly, Ritchy Valme, Eliesse getting that exposure, Jordan Semedo, Antonin Cartillier – a really exciting next chapter for the club that we can see developing and then also we have that external recruitment with Vanderson, (Caio) Henrique, (Axel) Disasi, (Youssouf) Fofana, (Mohamed) Camara, (Krépin) Diatta. All of these young guys are also coming through these strategies that we’ve implemented and now we’re seeing the signs of success in the outcomes like Aurélien going to Real Madrid and Benoît going to Chelsea.

How do you manage a transfer market whilst the academy is at the forefront of the project? Is there a worry about bolcoking the path of a youth product?

It’s reflecting on the short, medium and long-term and it’s in alignment with whatever your strategy is. For sure, if you’re at Manchester City, your objective is to win the Premier League and probably the Champions League. That is a very clear objective. For us here at AS Monaco we have to ascertain the value of short, medium and long-term planning. With Soungoutou Magassa, when we do look externally, it is a balanced approach of ‘okay what helps us facilitate an objective of winning and consistency of being competitive at the top of french football, but what does not damage the growth and development of our young player’. We have to look at the timelines of development while we’re also looking at the competition within the first team to stimulate performance as well.

Do you also, therefore, look at profiles that complement the development of young players?

We talked before and someone asked are you going to bring in a reserve player, or a number two player. The idea has always got to stimulate performance and competition. Every player we sign or develop because we have a true belief that they can be a starting XI player because even if they don’t become that, it is because another player has been successful. That creates positive conflict and competition. We do look at the players we sign: can they be mentors, can they be ambassadors, can they show the young players coming from the academy what it takes, what needs to be delivered to be a first-team player, whilst also not putting a ceiling on those young talented player’s development.

Does the strengthening hierarchy of domestic championships necessitate the kind of approach that Monaco is taking and is becoming an expert in?

I think when you look at global football, there has become a bit of a pyramid over time. Covid has had an effect in terms of the ability to invest and spend. But if you look at the change in landscape, I wouldn’t say it’s designated solely to French football. French football has been an unbelievable creator of talent, and I don’t see that stopping any time soon. I see that moving from strength to strength. But if you look at the Bundesliga now and how it moderated itself through Covid and the players that it will actively sell to the Premier League, Italian football, and Spanish football, I think when you start to look and reflect on most markets, you see a real adjustment to buying younger, developing more and sales to recalibrate some of the losses that every club went through during that Covid period.