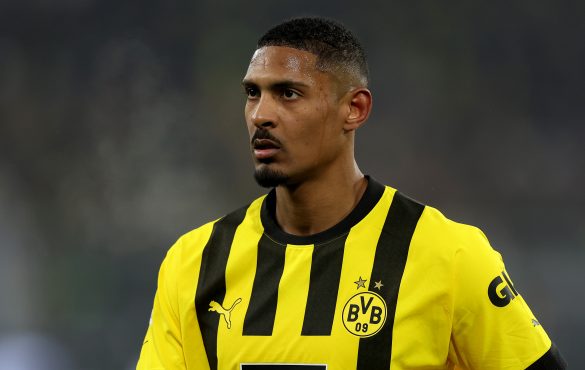 In an interview published in today’s L’Équipe, Borussia Dortmund striker Sébastien Haller recounted his return to action from battling a testicular cancer which was diagonosed in July, having played his first match for the Bundesliga side against Augsburg, on Sunday.

“It was a strong emotion. I had it in my line of sight from day one, to show my quality, in the knowledge that behind that there had been a fight. It added to my desire. We were all waiting for it. The only thing that lowered the intensity of the emotions was the scoreline, because I’m a competitor first and foremost and I came on at 2-2 [Dortmund would win 4-3].”

The Ivorian international describes the initial diagnosis, the moral support he received from those close to him, messages from fans, as well as the efforts of his personal trainer Tanguy Fleury to help him keep his fitness up, and the four chemotherapy sessions he underwent after his initial operation in the summer – “After the chemo, even though you feel rather fine, you really look like you are ill“.

Haller says he felt the public perception of him had changed as a result of his diagnosis – “You want to show that everything is fine, but there’s this look of pity, which tells you that you’re ill. It’s actually fine, don’t worry! [laughs] It’s not mean, people want to be compassionate, and I understand it because they want to talk about it. It’s not often a footballer gets cancer.”

Asked about whether he had felt fear, the forward dismissed the notion – “I said to myself : why be scared? If something has to happen, it will happen. If you have some control over it, then you can feel some apprehension, some fear, but in this case – I had no choice but to have faith in the doctors, who were exceptional with me. I had to carry on being mentally strong, have the right people around me and tell myself that with this attitude I’d get through this. And there’s also some responsibility as a professional football player.”

“[On his Ballon d’Or appearances] It was a great event, I received so much support, from the organisers, from the participants… In illness, there are moments which bring you together, that feel good. And you open up. You’re not quite the same anymore, you don’t have the same story anymore, nor the same way you approach challenges. There’s so many things to experience, you savour them that much more once you’ve gone through all of that.”